When he was very young Ray used to hear his father play alto saxophone and clarinet and knew, without question, that he would have to do the very same thing. At the age of seven he started to take lessons on clarinet from Len, his father, and   switched to alto sax as soon as he was physically big enough, at around 10. 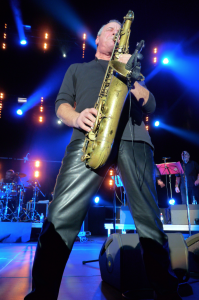 At age 15 he co-formed a 7-piece soul band playing alto sax, and created a weekly Monday night gig at a workers social club. Monday nights the club was closed to the workers and the kids were allowed to take it over and put on a soul-night, which became very popular, packing the place out every week. The band played all the new Otis Redding, Wilson Picket, Lee Dorsey ‘Soul/R&B’ songs which were just starting to come across from the States. He soon bought his first tenor sax and was playing in big bands, soul bands, functions etc. in and around his home town of Exeter, Devon.

One day he received a call from Steve Andrews, a contact at Chrysalis Records,asking if he was able to drop everything to go and play for the final week of a UK tour with Ronnie Laine of The Small Faces in his new band ‘Slim Chance’. Of course, he was able to, and this soon led to Ray’s move to London and into the world of recording and gigging there. On one early recording session he met highly esteemed trumpet player Dick Hanson, who started booking Ray on gigs and sessions. (“I owe so much to that chance meeting with Dick Hanson and to our close friendship which continues to this day.”).

In 1976 Ray joined Dick in the horn section with ‘Graham Parker and the Rumour’, touring America, Australia, New Zealand, Japan, UK and Europe. The section, consisting also of John ‘Irish’ Earle on saxes and Chris Gower on trombone, worked under the name ‘The Rumour Brass’and became ‘house horn section’ for Stiff Records. From there they went on to record and perform with an almost inexhaustible list of artistes, creating superb horn arrangements, and clocking up countless chart successes worldwide. One such recording date with Shakin’ Stevens led to several years of touring, recording and TV work during which time Ray recorded featured solos on many of Shaky’s big hits. 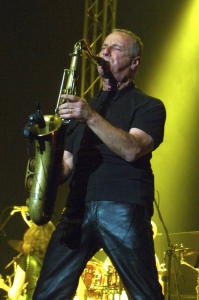 He currently travels the world with Suzi Quatro as her sax player and backing vocalist, and continues to work as a freelance session player, horn section arranger, soloist and saxophone teacher. www.suziquatro.com